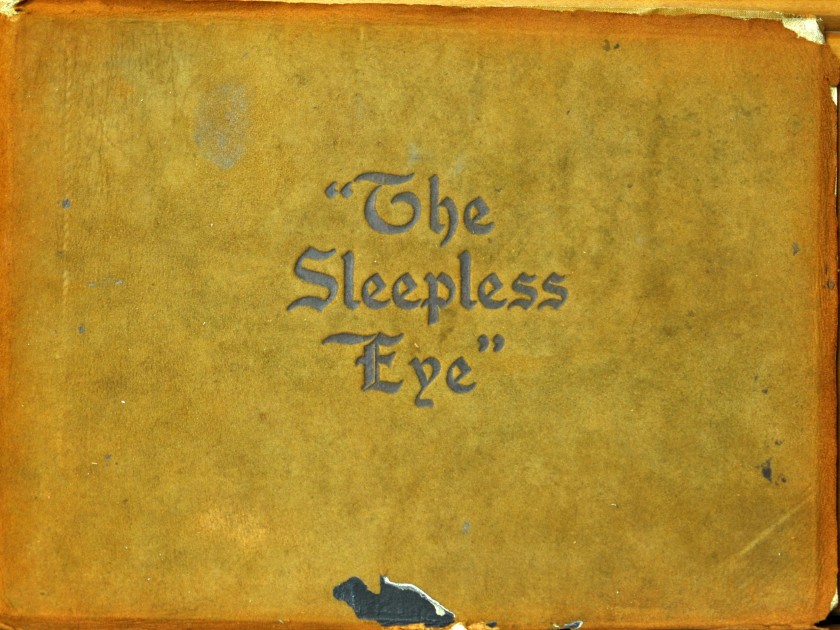 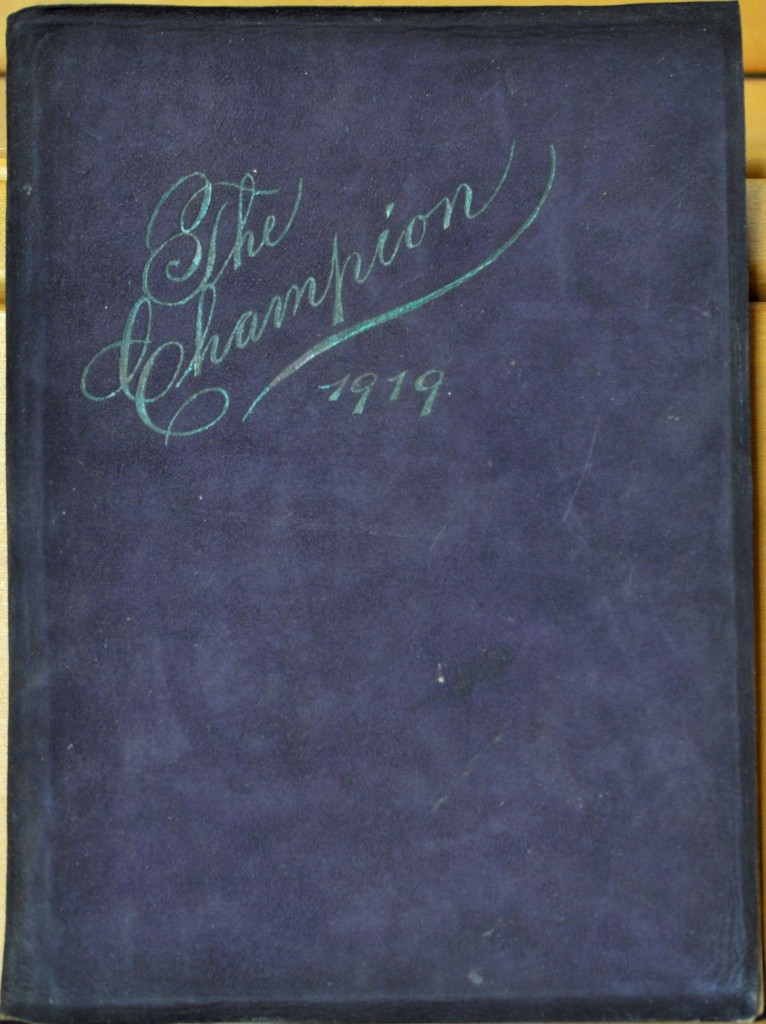 The Champion 1920 is now available in high resolution.  A new procedure to digitize Central historical documents was tested successfully.  Resolution is now high enough to support the PDF Reader search function.  Look for more Champions in high resolution to be posted in near future.  Check this out: 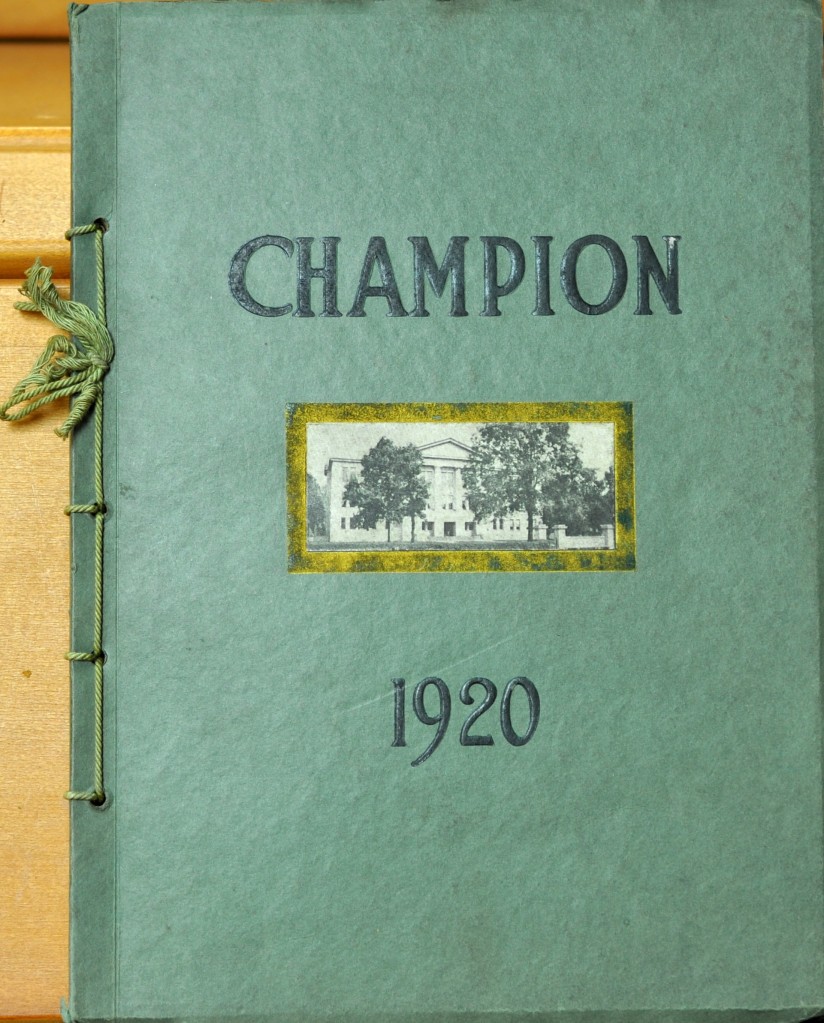 Shows One of the Side Entrances to the Original School Building

Construction began in 1906 on the site of the powerhouse and car barn of Chattanooga Electric Railway.

Information from one of the original placards at the entrance on the Dodds Avenue building.

Placard was relocated to the new school building on Hwy 58.

OF THE COUNTY COURT

Here is a wonderful example of Central lore that we are uncovering in our research. Please add your reflections into the human side of the Purple and Gold.

PRINCIPAL ZIEGLER STOPS DANCE AFTER JUNIOR FEED
-Chattanooga Times, May 15th, 1919
Fair weather prefaced a storm and a tranquil and sweet beginning preceded a bitter end last night when at the Junior-Senior banquet and entertainment of Central High school Principal J. S. Ziegler, with stern and emphatic language, declared against a dance planned by the boys and girls of the Junior class.

At the end of the dinner program last night, when the Juniors had planned to clear the Patton (Hotel) ballroom and end the evening with a dance. Mr. Ziegler ordered the room cleared; staying some forty-five minutes to see that the lingering banqueters did not indulge their terpsichorean fancies.

After a number of those in both classes had decided to disregard his admonitions and run the last part of the program to suit themselves, they found the ballroom locked and as Manager John Lovell was nowhere to be found, they left the hotel with a bitter taste and rebellious trend of reflection, to go to their homes.

The banquet went off with exquisite smoothness until George J. Heron, the president of the Junior class, announced the dance, when as one present remarked, “Turmoil broke loose.”

Not only did the principal announce that they must not dance but he declared that he would suspend all who stayed in the hotel.

A representative number of Central boys last night declared that knowing their principal’s objections to dances; they made the dance a separate part of the program. The principal was not to be in charge of this feature and, according to some of the youngsters, was not even invited.

Mr. Lovell, they said, agreed to let them use the ballroom for dancing when the banquet was over. The orchestra was furnished by them and the dance; they said was to be a “private” affair. They doubted the principal’s right to interfere, but as they found the ballroom closed they were forced to go away disappointed, not however, without budding plans for a continuation of the program in the future to be held without his supervision.

P. P. Celzer (probably W. P. Selcer) and Mrs. L. M. Russell were two other members of the faculty present. They advised the youngsters to go home without crossing the will of the principal.

Charlie Sedman says “if there had been a yearbook for 1908, this is close to what the faculty photos would have appeared.  I took me two years to track these guys down (actually the three that left after 1-3 years and never appeared in a yearbook).”

Classes were held in the Old Ridgedale School at the corner of Peachtree and Bennett Ave starting on Monday, Sept 9, 1907 until Christmas-New Years break, and thence in the new building on Monday Jan 6, 1908.  All 9 faculty were present, to my knowledge, during this time.   The only public records of Ridgedale classes are the conversations and recollections by students posted in the Digests for 1910-11, particularly noting that some classes were held in hallways and the building was unheated.  The new building must have seemed like a palace to students and faculty when it finally opened.

I might add that I found A T Roark’s picture (graduating from UC Law School in 1910) in the Connor-Roark family history book through their website; W K Greene’s pic came from a 1907 photo in the History of BGA book, and Mary Bibb’s was cropped from a 1907 family photo via her grandson, Kirk Johnson, which we scanned just after the August 2 Connection Lunch.  The remaining 7 photos are scanned from later Central yearbooks.

The following are articles by Charlie Sedman are extracted from The Central Connection:

On Friday September 6, 1907, Central High School opened for registration at the old Ridgedale School on the corner of Peachtree St. and Bennett Ave.   Central thus became the first high school in Hamilton County to offer a four-year curriculum (City didn’t adopt a four-year program until 1912) and the second county high school (Tyner opened the following Monday).   By September 19, registered students totaled 156, and this number would grow to 230 by mid-year, and then to 306 by the end of the year, aided by the promotion of 76 area eighth graders to the ninth grade at mid-term, as the new building opened.   [Central would not move into the new building, designed to accommodate 500 students, until January 6, 1908.]

The new Hamilton County Plan (1906) was to have one four-year high school offering a full college prep diploma with peripheral high schools offering three-year certificates, requiring all students seeking a diploma to complete their fourth year at the new central high school, thus the name Central High School.  Of course this was very difficult for students living in the Soddy and Sale Creek areas, so in short order their schools, along with Hixson and Tyner, were expanded to a full four-year program.  But the original central school retained the name Central High School.  So now you know.

The majority of Central students in the early days were mostly nearby, i.e, within walking distance or a streetcar ride from school, meaning that students from areas north of the river or well east of the ridge had some logistical problems getting to Central.   Teachers and students mostly lived in the Glenwood-Ridgedale-Highland Park-Eastside-East Chattanooga area. A very few of the notable early grads like Creed Bates (1911) commuted all the way from St Elmo. Very little indication that the farm kids came into town to go to school. Also Soddy, Tyner, Sale Creek, and Hixson then were very small schools by comparison to Central and City; graduating classes in the 1910-20 era were single digits compared to Central and City being near 100 each. In the 1920s more students from Eastdale-Brainerd-East Ridge and Hill City (North Chattanooga) flowed in as those areas transitioned from rural to suburbs.   The Hoodenpyl (Signal Mtn) and Olinger (moved from Soddy to Riverview) clans are examples of large rural famililes sending their kids to Central in the 20s as transportation improved. This necessitated the big expansions of the building in 1923 (auditorium and south wing) and 1927 (Science or north wing), and again in 1937 (west extensions off the north and south wings). In summary, early Central students were mostly urban kids and did not have to choose between school and farm chores. This is also the reason the rural high schools did not field competitive athletic teams for decades – fewer students and limited time for after school activities, e.g. gym was athletic team practice.

On Tuesday, September 10, 1907, the Chattanooga Times reported on page 3, “The Central high school is now figuring on a football team.  Among the members of the county high school faculty is Coach (Curtis) Green, formerly of the Battle Ground Academy, Franklin, Tenn….it is believed he will put out a fast team at Central high school, providing money can be secured to start the movement.”

This answers the question, “Which came first, Central or the football team? And the answer is the school, but only by a few days.  The football team did precede classes in the new building by nearly three months.

I’ll have a few followup notes under the 101 Years ago heading, leading to Central’s first two football games in October 1907 against Baylor and City. 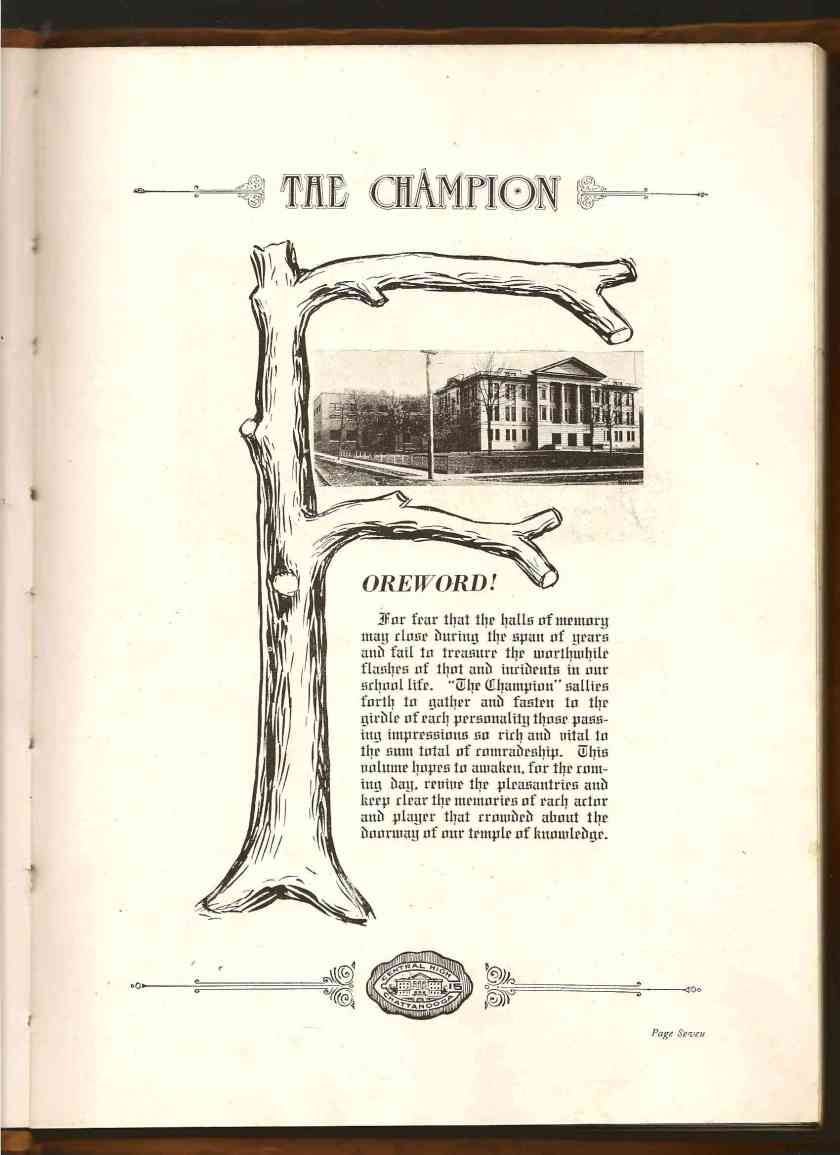 As I read this, my thoughts turned to how the words apply so much to

This quote printed at the bottom of page 9 of The Central Digest, October, 1910, caught my attention.  Below is an extract from the article entitled “What Central Means” on that same page.

The launching of the enterprise of the County High School in Hamilton County was attended by a rare conjunction of favoring conditions: fearless, intelligent, broad-minded men in places of power endorsed by an equally intelligent and broad-minded public; so Central, in addition to an auspicious launching, with two progressive men in the respective chairs of principal and superintendent, may verily be said to sail under a lucky star. Her future may be judged by her past; and the most conservative mind must predict for her a growth and development that will rank her the equal at least, of the foremost high school in the state. N. C. C.

Charlie Sedman provided Nannie Carmack Carter as the name represented by the initials: