On Friday September 6, 1907, Central High School opened for registration at the old Ridgedale School on the corner of Peachtree St. and Bennett Ave.   Central thus became the first high school in Hamilton County to offer a four-year curriculum (City didn’t adopt a four-year program until 1912) and the first county high school (Tyner opened the following Monday).   By September 19,   registered students totaled 156, and this number would grow to 230 by mid-year, and then to 306 by the end of the year, aided by the promotion of 76 area eighth graders to the ninth grade at mid-term, as the new building opened.   [Central would not move into the new building, designed to accommodate 500 students, until January 6, 1908.]

The new Hamilton County Plan (1906) was to have one four-year high school offering a full college prep diploma with peripheral high schools offering three-year certificates, requiring all students seeking a diploma to complete their fourth year at the new central high school, thus the name Central High School. Of course this was very difficult for students living in the Soddy and Sale Creek areas, so in short order their schools, along with Hixson and Tyner, were expanded to a full four-year program. But the original central school retained the name Central High School. So now you know.

The majority of Central students in the early days were mostly nearby, i.e, within walking distance or a streetcar ride from school, meaning that students from areas north of the river or well east of the ridge had some logistical problems getting to Central.   Teachers and students mostly lived in the Glenwood-Ridgedale-Highland Park-Eastside-East Chattanooga area. A very few of the notable early grads like Creed Bates (1911) commuted all the way from St Elmo. Very little indication that the farm kids came into town to go to school. Also Soddy, Tyner, Sale Creek, and Hixson then were very small schools by comparison to Central and City; graduating classes in the 1910-20 era were single digits compared to Central and City being near 100 each. In the 1920s more students from Eastdale-Brainerd-East Ridge and Hill City (North Chattanooga) flowed in as those areas transitioned from rural to suburbs.

The Hoodenpyl (Signal Mtn) and Olinger (moved from Soddy to Riverview) clans are examples of large rural famililes sending their kids to Central in the 20s as transportation improved. This necessitated the big expansions of the building in 1923 (auditorium and south wing) and 1927 (Science or north wing), and again in 1937 (west extensions off the north and south wings). In summary, early Central students were mostly urban kids and did not have to choose between school and farm chores. This is also the reason the rural high schools did not field competitive athletic teams for decades – fewer students and limited time for after school activities, e.g. gym was athletic team practice. Think of it Ed, NO two-a-day practices in August.

Charlie Sedman’s post to The Central Connection on February 28, 2009:

Hamilton County was formed Oct 25, 1819 as a result of the Calhoun Treaty giving all Cherokee land North of the Tennessee River and Hiwassee River to Tennessee.   First county seat was at Dallas. Joseph Vann, a wealthy Cherokee, owned a large plantation at the mouth of Ooltewah (Wolftever) Creek across the Tennessee River from Dallas, and operated a ferry to Dallas. In 1828 Georgia confiscated all Cherokee lands, driving Vann from his largest plantation in Georgia to refuge in Tennessee.   Vann lived at his Tennessee plantation (which in 1828 had 110 slaves, 35 houses, a mill, three horse racing courses, and a ferry boat) until 1838, when all Cherokees were removed forcibly.   The New Echota treaty of December 1835 gave all Cherokee lands to Tennessee, so Hamilton County was extended to the Georgia border. A land office was set up in Cleveland in November 1838 to sell the parcels south of the Tennessee River, including the Vann plantation.

A group of prominent citizens was charged by Hamilton County to consider relocation of the government and that group chose the new community of Harrison near the old Vann plantation, to be the new county seat in January, 1840. Coincidentally, that same group of prominent citizens had previously purchased all of Vann’s estate and much more, had surveyed and laid out a new town, and had named the new location Vanville, and were offering lots for sale in 1839.

The name was changed to Harrison (named for the new US President) in 1840 when the county government was moved across the river.   Harrison began competing almost immediately for the new railroad planned from Marthasville (now Atlanta) Georgia to the Tennessee River, but lost out when the State of Georgia was offered a large piece of land by Chattanooga (later housing the old Union Station on Broad Street).

So Chattanooga became the railroad center and Harrison remained a small community. In 1870, the County seat moved to Chattanooga, and, in protest, Harrison residents successfully petitioned the courts to form a new County, James, with intentions of becoming the new county seat. However, in an 1871 referendum, Ooltewah was voted the James county seat. So Harrison remained a small community until flooded by Chickamauga Lake in 1940.   As a footnote, one of the earliest Hamilton County residents south of the Tennessee River was Thomas Guthrie, who on August 7, 1839, secured a land grant of 160 acres one mile north of Vanville (Harrison) on Georgetown Road, where he lived and raised 8 children. 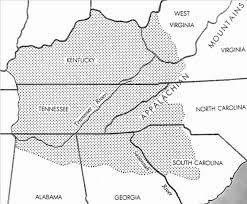 Sadly, included in Central’s historic legacy is the sometimes forgotten fact that the school was built on the site of a bloody civil war battlefield where both union and confederate soldiers marched, fought and died.